It was disappointment for Park as they fell to their first home defeat of the season against a well organised Rams team. The victory meant Park’s lead at the top has been cut from ten to seven points.

Despite starting the brighter of the two teams, the visitors conceded a try in the 17th minute as Kyle Trainor manged to squeeze the ball over from a yard out, after a driving line out.

It took 35 minutes for Rams to get points on the board as they finally cashed in on their first half pressure when some slick passing saw Rowan Grundy pierce through the Park defence.

On the stroke of half time, Park elected to take the points in a game where scoring was hard to come by, as Craig Holland knocked over to take the score to 8-5.

The boys from Berkshire came out with the same intensity in the second half. Rams worked the ball nicely to the right hand side where Henry Bird calmly collected and ran in.

On the 67th minute the Rams pack managed to get a penalty try from a scrum 5 meters out, extending their lead to 17-8. It was a determined effort from Rams, embodying the application and authority they played with all match.

There was some late hope for Park when Charlie Piper powered over from a yard out. However it was too little too late for the Londoners.

It was arguably a must win game for the visitors and they played with that attitude. A consolation for Park was that they managed to get a bonus point by keeping the score within 7 points.

Park will look to improve next week in a massive top of the table clash against 3rd placed Sale FC. 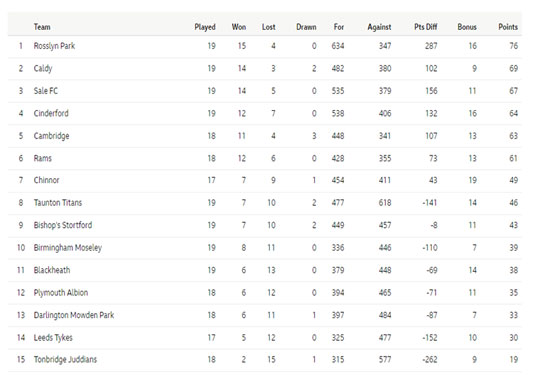 Rosslyn Park see their lead cut to 7 points.
The five teams below Park all with wins making it tight at the top

Park's last game of February sees them travel to the North to take on Sale FC. Sale FC have been one of the most impressive sides in the league and like Park, in the hunt for Championship promotion.

Park's last game against Sale FC was a tight affair at The Rock with Park scrapping to a home 20-15 win. The last time Park went to Heywood Road, Park came away in handsome fashion winning by 13-46.