Four disciplinary scores were handed out with four sin-bins by referee Harry Walbaum as Park dropped to second in the Nat 1 table.

Park took the early initiative as their maul on 10 minutes earned a penalty try as Rams lock Connor Stapley was sin-binned.

The home side briefly went down to 13 men when Cameron Zeiss was sin-binned for a high tackle nine minutes later.

Rams, though, had something to say as Tom Vooght finished their own maul with six minutes to go.

Harry Leonard kicked his own five minutes later but a Rams score by Niall Kidd on the hour put the pressure back on.

Park’s substitute fly-half, though, was on hand again to kick his second penalty with 11 minutes to go.

But a sin-bin for Henry Spencer on 77 minutes allowed Rams to win a penalty try two minutes later.

Despite some last-gasp defending, the boys could not stop the home team getting another penalty try in the last move of the game. 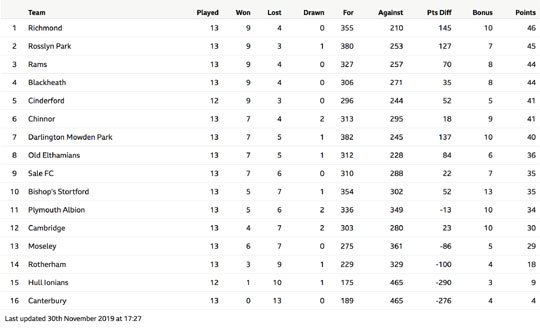 Park welcome a Stortford side that have pushed the league’s big teams close and are starting to find some dangerous form.

The Hertfordshire side will be flying high after crushing Canterbury 43-0 at Silver Leys.

Fans will remember the last clash between these sides fondly as an epic 27-25 win while the last game at the Rock was won 25-17.