Henry Cheeseman’s brace saw Rosslyn Park to a dominant 38-16 win over Bishop’s Stortford at The Rock.

Arthur Ellis and Jack Gash added their names to the scoreboard along with a penalty try as their five-score haul left the Hertfordshire side non-plussed. And the bonus-point win saw Kieran Power’s boys return to the top of the National League 1 table on games lost.

Park got a foothold in the game in the first four minutes, Cheeseman finding the line after Neville Edwards’s break through the middle. But Stortford put themselves on the board five minutes later, an offside leading to Austin Pope’s penalty kick beneath the posts. And the visitor’s kicker doubled his score within two minutes as he kicked from the right on the 22-metre line.

After a competitive 10-minute spell, it was Park’s turn to win a penalty as Craig Holland slotted one for not rolling away on 20 minutes. The fly-half was given another kicking opportunity five minutes later – but grazed the edge of the right post from 30 metres out.

Park got the next big break of the game with five minutes to half time as Ellis kicked, ran and made it to the five-metre line. And the following scrum ended in a penalty try for Power’s men, putting the demons of last week’s Rams game to bed. The third try was secured with two minutes to the break, Cheeseman strolling through a gap to score beneath the posts.

Park had their bonus point three minutes into the restart as Ellis broke away from a maul to find the line.

Stortford worked hard for the next 15 minutes and were rewarded with a try on the hour, Nick Hankin running clear on the left. The home side did not let them gain momentum, though, as Gash leapt onto a loose ball in the corner for the fifth try.

The visitors pushed for a second try – and their fast movement of the ball saw James Freeman sin-binned with five minutes to go. They finished the game with James Apperley going over but Park were already celebrating. 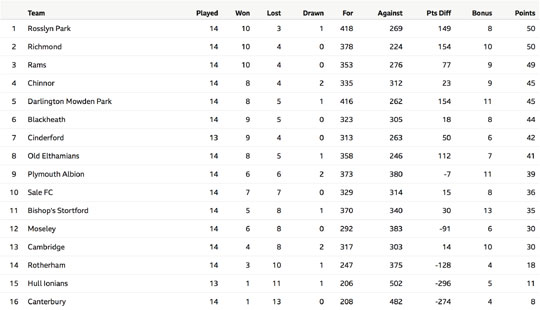 Park face a long trip to Gloucestershire in their last away game of 2019 against top-six side Cinderford.

The Cindy Dogs suffered a blow to their title hopes as a shock 19-17 loss to Canterbury ended a winning run of four games.